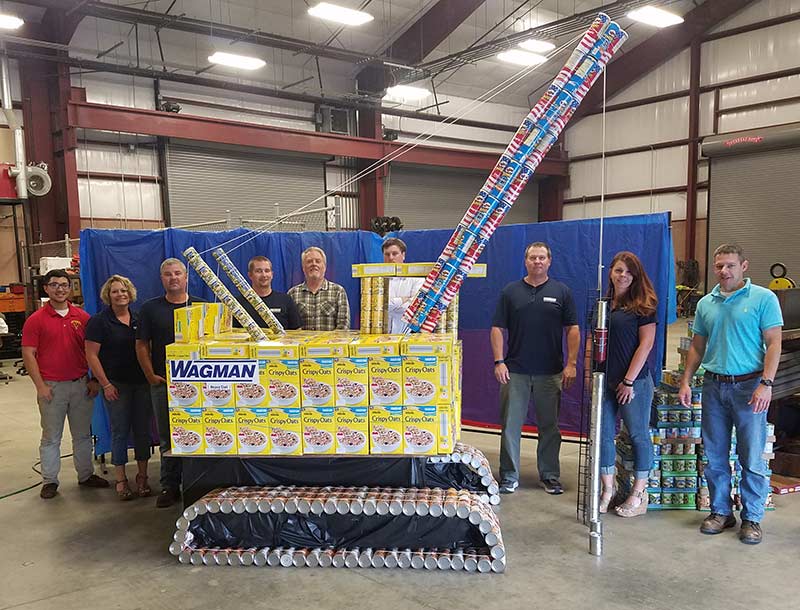 (York, PA ) Wagman, Inc. sponsored its third annual Can-Struction contest during the month of May. Offices and jobsites were broken into teams and invited to collect canned goods and other non-perishable food items for local charities. On the final day of the competition, teams had 90 minutes to construct the donations into sculptures. In total, the company donated 2,748 pounds of food.

Photos of the Can-Struction sculptures were featured on social media and on the company Intranet so employees and followers on social media could vote for their favorite sculpture. Taking top honors for the third year in a row was Wagman’s Dinwiddie, Va. office with their “Driving Out Hunger” sculpture. The team receives $250 to designate to a non-profit of their choice, as well as a certificate. “Wagman Truck” built by a team at Wagman’s corporate office in York, Pa. won second place. Their prize was a certificate and $100 to designate to a non-profit of their choice.

“This is one of our favorite events every year because of the energy, the friendly competition and ultimately, the end result”, Lisa Wagman Glezer, Vice President commented. “It was great teamwork for a great cause. Our Pa. offices nearly doubled their donation total from last year and as a whole, we collected over 400 pounds more food than last year. People were inspired and the best part is that our employees come together, have fun and it all benefits others in our communities where we live, work and play.”